In 1998, the history of Lathom was – and had been for centuries, surrounded by myths, folklore and academic argument.

Work involving archaeologists, researchers, historians and our own members since Lathom Park Trust was informally set up in 1998 before its formal launch in 2000, has gone some way to discovering the real truths.

Significant Iron Age, Romano-British and Medieval settlements have been discovered along with ancient Parklands – details of which can be found on preceding pages.

Our most recent success has been identifying, beyond doubt, the site of the long-lost great medieval fortified palace of Lathom. It covers a large area which encompasses the Pleasure Garden in the east and the 18th Century stable in the west.

The moat has also been partially identified which was in excess of 15 metres wide and surrounded by a huge sub-circular platform about 300 metres across. To put the scale of Lathom House in true perspective-it was two and a half times the size of the imposing Lancaster Castle and larger than the Tower of London.

No sign of the medieval complex remains above ground level. Its exact location has, until recently, remained a mystery and a source of speculation for the last two and a half centuries.

A full colour booklet ‘Searching for Lathom House’ is available from the Trust, which gives a comprehensive record of these exciting ‘finds’. Much work is still needed – to uncover yet more of Lathom’s treasures. 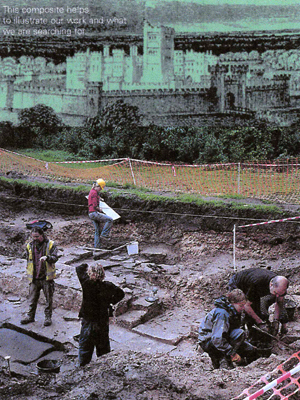