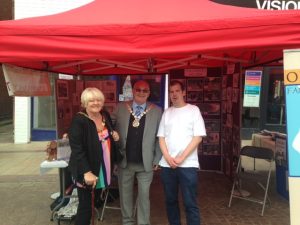 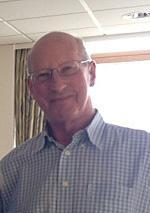 I am Mark Hill and I am the fourth generation of my family solicitors Dickinson Parker Hill (all three!). I have lived in my house in Sandy Lane Lathom (which my father built) all my life. My mother’s family were farmers in Sandy Lane. My great Grandfather was George Roper from Cranes (Hall), Cranes Lane and Agent to the 1st. and 2nd. Earls of Lathom (see plaque in Lathom Chapel).
I have been a trustee for 16 years and have done research in Lancashire Archives Preston in documents dating back to the 14th Century! This was probably my best role! I have also pulled Rhodies in Spa Roughs and nearly broke my knee in the interests of the Trust!
I was Treasurer to the Trust for several years and have erected tents/marquees and poured wine for functions and stood in as Chairman at trustees meetings and the AGM.
I think it is fair to say that I am near to my end but will do my utmost until then 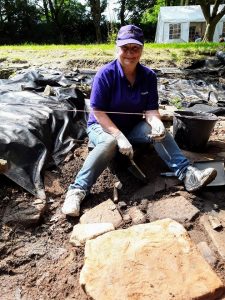 Don’t be fooled by the photo I know nowt about archaeology (several fellow Trustees can confirm) but I gave it a go and I loved it, I found unburnt coal! I know!

Growing up at Ladies Walk, Cross Hall, I was surrounded by history and I sometimes reflect on the buildings and fields I played in as a child and it hurts that I wasn’t tuned into their significance at the time. The old work horse harness we played with still hanging in the old stable; the cellar of the 17th century Cross Hall we played on and tried to crawl through, now demolished; the remains of the Cross Hall moat/ornamental lake that we made our home in the summer when we would play out until dark.

I now live on Lathom Park a mile from my childhood home and apart from being far away from my son and granddaughter (they live in California) I love it here. It gives me a great base to carry on as Secretary and Trustee of Lathom Park Trust.

If anyone would like a talk on the history of the Estate, (that is 4 hour long talks just skimming the surface!) let me know. I am very proud to be involved with the Trust and look forward to making progress in the various up and coming projects.

I live and work in Ormskirk. After thirty years of working for local solicitors firms as a legal cashier/ practice manager, I decided that I needed a change. I joined the management team at Brookside Retirement Living Scheme in Ormskirk in 2015. We manage 111 apartments with our team on site 24/7. We hosted a successful LPT display at Brookside in February this year and are planning another date in August. I have 3 grown up children and 7 Grandchildren to keep me busy also. I have always been interested in history but especially local history and family history particularly. One branch of my family where found to have been resident in the Ormskirk area continuously since the 1500’s. Sadly, I have not found any connection to the Lathom Estate yet, that would be a bonus. I was very proud to be asked to be a Trustee of LPT. I believe that it is imperative that the history of the Estate and its occupants is researched and documented for future generations, as so much has been lost already. I hope to support the Trustees in delivering the Trusts Aims to advance the education of the public by attending displays and promoting the Trusts work on as many platforms as possible.  My current efforts for the Trust include researching community grants for Heritage groups and preparing bids, I actively seek to encourage new members to join the Trust as there is a lot of history to find at Lathom  and help is always welcome.

Jamie has been a Trustee of Lathom Park Trust for 20 years since its formation in 2000. He is a professional archaeologist, who works as a project manager for Oxford Archaeology North, and has 35 years experience of research into the archaeology of the North West.

He is enormously passionate for the archaeology of Lathom House, and has undertaken numerous archaeological surveys and excavations within and around Lathom Park on behalf of the Trust. This includes the very successful community excavations and surveys undertaken in 2009 which provided remarkable insights into the medieval history of Lathom House.

He has led a  community survey into the moated site of Spa Roughs, and is looking to better understand the medieval history of the De Lathom family and also the Parliamentary defences during the Civil War siege of Lathom. Jamie is currently working in Saudi Arabia recording a huge abandoned city in the desert.

Andrew has been a member of Lathom Park Trust since March 2006 and has lived with his wife Elizabeth in the area for over 47 years.

Andrew and his wife are long time members of the congregation at Lathom Park Chapel, and currently on its Committee. He is also on the Ormskirk PCC, a Tree Warden for Lathom South Parish and on Lathom South Parish Council. During his working career Andrew was a Patent and Trade Mark Attorney, in a firm with offices in Liverpool, London and Munich. His other interests include archaeology, golf and squash.

“The Trust has contributed significantly to knowledge of Lathom history, and hopes to continue doing so, particularly about the stages and locations of Lathom House and the Remount Depot”.